…to think about the box. Twice during the weekend, someone said that if I wasn’t there to explain what it was, the first thing the animation and the design of the phone case made them think of was something funny, playful. At the moment that I told them that it was related to the technology, the use of the Internet and the natural environment, they agreed the design was coherent and they liked it. But they were right: the packaging is very important because it is one of the first thing that the user will see so it needs to express the core of the project.

I spent my weekend at the Maker Faire in Paris to present both the TeleMandala and my prototype. It was a great opportunity to meet people and to get feedback. My first impressions concerning the prototype were that 0.5cm is way too thick. 0.3 is okay, 0.2 is perfect. The next thing to test was the material: is it more interesting to have a wood render or a plastic render ? 50% of the people preferred the wood, 50% preferred the plastic. In my opinion, I prefer the wooden render but I think it could be an interesting idea to create both. Or maybe people preferred the plastic because of the black color and the contrast it made ? Meaning it could be made of wood but then tainted in black ? I think that this is a better idea than using plastic. Because it could be a great argument to sell the product but also a way to be more respectful towards the natural environment.

I met Cécile Quach, of the City of Paris. She told me that it would be interesting to take part in the “Hackging the de l’Hôtel de Ville” at the end of May. I also met members from the Innovation HUB of Epitech school. I told them about my project because there is a part I won’t be able to prototype fast enough because I won’t be able to mix a coded part with a prototyped part [with softwares like Pixate]. I just sent them a mail with the details of my project, I hope to talk to them soon. 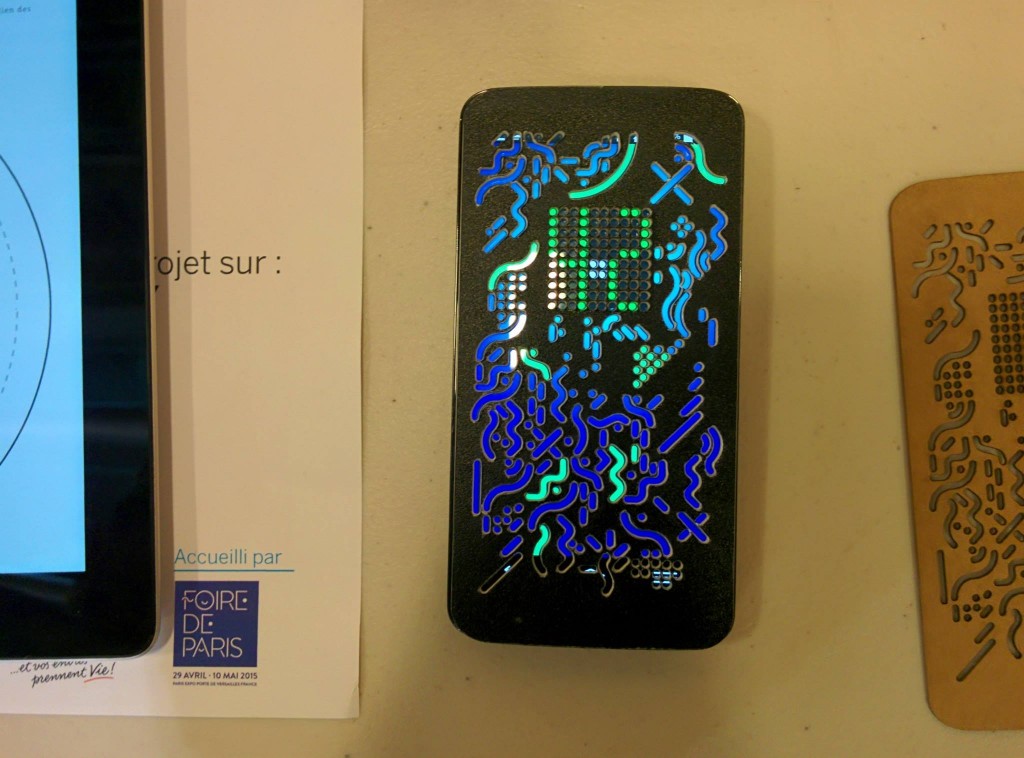 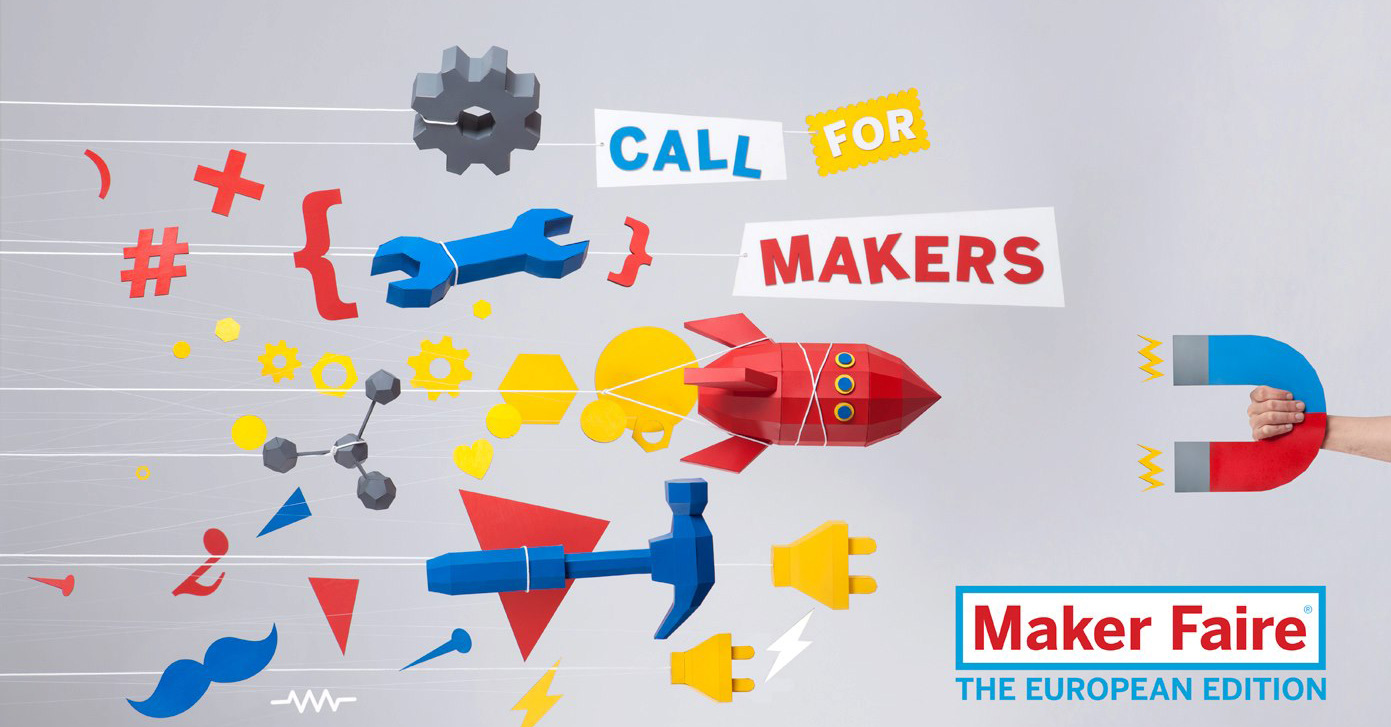 This weekend I’ll take part in the Maker Faire in Paris. This is the third where I exhibit [after Paris in June 2014 and Roma in September 2014]. I need to quickly create two prototypes. If I’m fast enough I’ll be able to make a wooden phone case and to cut holes with the laser machine from thr WOMA. Otherwise I can also do it with a piece of paper and print the organic shapes I design.

I also want to design at least 3 screens of the app. Best case scenario: they would also be interactive thanks to a prototyping app. It will help me to gather feedbacks from potential users. There will be Fablab [like the WOMA] and professionals I could talk to. They will eventually give me feedback too. My project is then to rework the concept based on the users reactions.

I won’t be the only one from my school to present something. In fact we have a whole booth dedicated to the school. My colleagues will be there too, presenting a project we have been working on since November in addition to our dissertation. The project is called Telemandala. The name is a reference to the project Telegarden created in 1995. This is a collaborative experience through internet where users can create a mandala by controlling two robotic arms. I’ll let you discover this project through the video below.

Recently I the idea to create a small platform to explain my project to professionals and teacher [plus my friends & my family]. This website is divided into two main parts:

I consider it as a milestone; with all the previous ideations, it’s a way to make the project more concrete and consistent. Some people I met before still had in mind the idea of an old ideation. By creating this simple website and mailing it, I’m proceeding at an update. To me, it’s also a good exercise because I need to be very explicit and have a clear presentation. I realized that I’m often tempted to explain all my thoughts when I only need to explain just a part of it.

I received some good feedback on it. But I guess some things need to be reworked such as the first slide of the presentation. I think is doesn’t show clearly that my concept is a phone case which protects the screen [Jonathan told me to maybe find a better word than “phone case”, it could avoid the confusion]. Also, some people didn’t understand at first that everything was linked to an app. I will rework the illustrations and the text.

At the end of March I made a survey where I asked several questions about environment, social networks and phone cases. One of my last question was:

Do you consider your phone case as:
a way to express your style?
a way to protect your smartphone?

Recently I decided to pay more attention to the way people use their smartphones in the daily life: at home, in the street, while driving, in the subway, at work. My main motivation was that since I wanted to use the back of the smarthpone I needed to see if it was oftenly covered or hidden.

How are their hands placed arround the phone when they text of when they call someone.
How is their smartphone placed on the table ? Face down or up ?
What part is mostly hidden ?

I will try to briefly explain my reasearches.

First, a lot of people are playing with their smartphone when they have it in their hands. I mean, they are are not playing videogames on it, they are just playing with the real object. Sometimes it falls, sometimes it breaks. When they got a call, 50% to 65% of the back of the smartphone it covered by the hand. When they place their smartphone on the table, it’s usualy for two reasons. The first one is that they don’t want to damage the screen, which seems to be more important than the back. The second one [thanks Jonathan] is that they usually want to check on their notifications while chatting or working. These are constant reminders of their connected life. So they want to be able to tap on the screen, check briefly the title of the notification and go back to their activity if it’s not important.

I think that it would have been kind of a mistake to use the back of the smartphone. I was thinking that it was the most visible part, but I was wrong. Paying attention to people and the object they use everyday helped me to make really important choices for my project. I also found great opportunities ! It gave me the idea to focus on the screen and the phonecase covering the screen. Because this is the most fragile part of the phone for the users. If everything takes place here, then I don’t need to have a connected objects on the back using energy and think hardware. It could be very discrete and less intrusive, and it could just use some battery of the phone by displaying minimalistic informations. Another opportunity is that, by covering the screen or a part of it, I could prevent people from checking on their notifications. Maybe this little friction would make them to constantly be tempted to use their social networks at every time during the day.